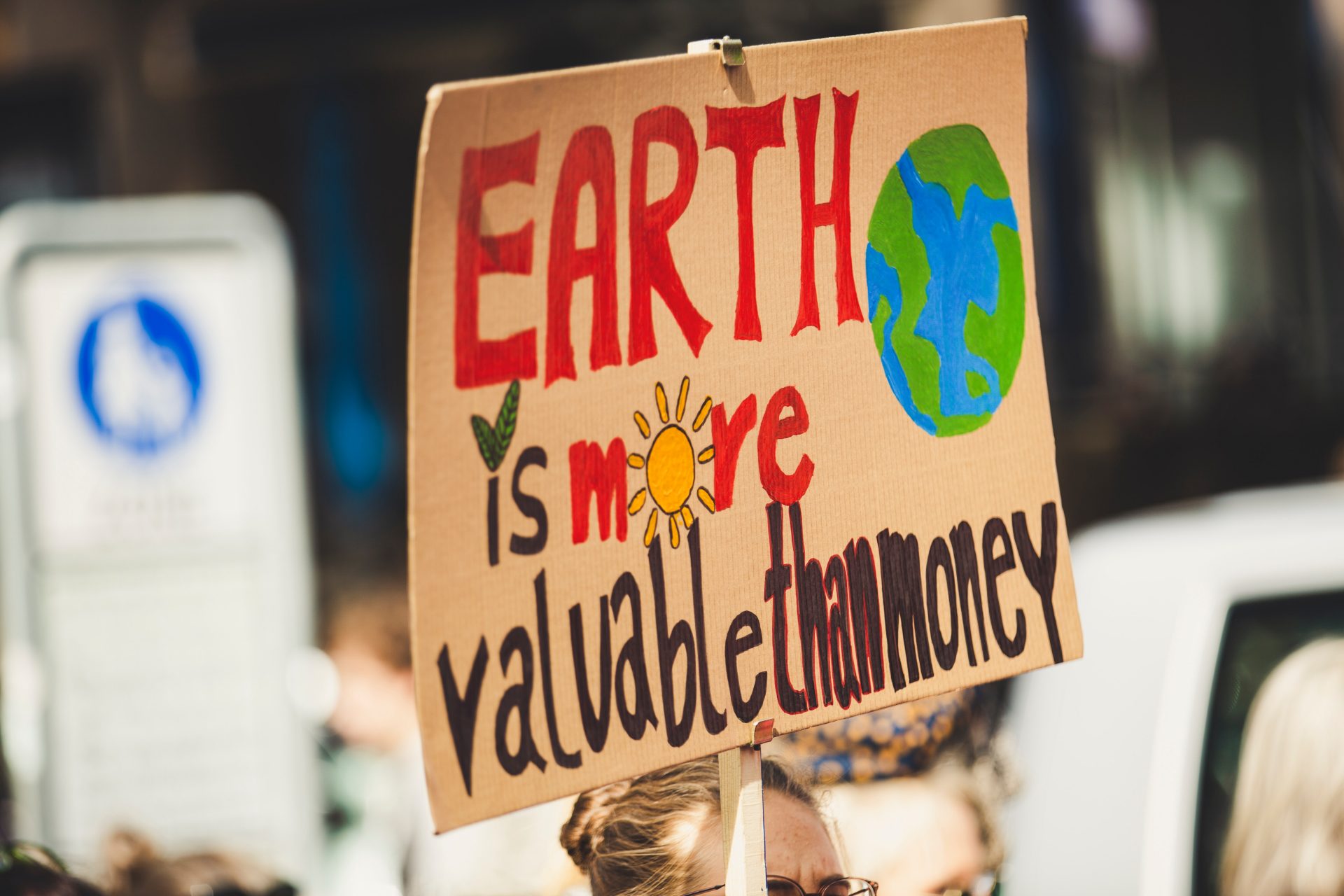 Many people have used the term innovation in the past to argue that technological progress will solve all problems by itself. They meant that there is no need for further climate action, no need for any kind of change. Because innovation will solve climate change and any other problem without any of us changing anything.

On the other side, there are millions of young climate activists for whom any delay in climate action is unacceptable. They demand that the destructive status quo is changed at once through policy. That coal power plants are shut down, internal combustion engine cars are prohibited, planes are kept on the ground, and much more. And all of that should best happen by today because the climate budget demands it. They can smell someone ten miles against the wind who tries to avoid responsibility for necessary change. This has caused climate activists to react negatively and disappointedly to the term “innovation”. After all, innovation hasn’t saved the planet, yet has it? And humanity cannot just sit around and wait for some miracle innovation to happen – the issue of climate change is simply too big to fail. That’s why they chose political action from demonstrations up to violence to demand swift policy changes over believing in innovation.

But is it really a choice of one versus the other? Can the climate targets even be achieved by either one of them alone? Today, I am trying to provide answers to these questions by analysing the following topics:

Let’s start with climate change itself and try to get a picture about just how big the problem really is.

Climate change is most likely the biggest problem humanity has ever faced. If you are reading this article, you already know this and you want to do something about it. Many of us want to live a sustainable life, make the right decisions when buying food or clothes, and support climate action either actively or passively. But in today’s greenwashing world where every business paints itself as green and sustainable, it is hard to make out the companies who are really having an impact. Let’s create a common framework for putting companies, actions, and technologies into perspective in relation to the size of the problem.

In his book “How to Avoid a Climate Disaster”, Bill Gates proposes to compare the carbon-savings potential of a technology to humanity’s total emissions. This is profoundly important to increase our chances of solving climate change. Otherwise, we might spend all our resources on things that seem good or even are better than conventional solutions but have no meaningful impact whatsoever because we spent too much money on peanuts.

Back to climate change: In 2019, global greenhouse gas (GHG) emissions reach 57 billion tonnes (Gt) of CO2-equivalent. To make this a little bit more tangible: That’s the weight of the Mount Everest every three years. The freaking Mount Everest. Or to put it into COVID terms: 456 trillion (12 zeros) rolls of toilet paper. That should be enough for the next couple of lockdowns.

However, it’s not funny. There is not a single thing in human history that we made more of than CO2 and equivalents. 57 billion tonnes per year are not created easily. Everything we do – growing food, making things, moving around, living a good life – releases greenhouse gas emissions. And as more people climb up on the wealth ladder worldwide and the global population is expected to grow to ten billion people by 2050, energy and resource demand grow accordingly. So, we don’t just reduce emissions to zero, but we must do so while providing for more people at a higher standard of living than today.

Some people will say that this is not possible and that everyone must cut back on their way of living, e.g., by not flying anymore. But there are three reasons why I disagree with this approach:

That is why we must cut back emissions as effectively as we can – keeping in mind the limited resources that we have for climate action.

Many impact investors have set up criteria to identify these effective and rapidly scalable solutions that we so urgently need. For example, the impact VC Planet A does full life cycle assessments of their potential prospects to determine their potential impact. And Breakthrough Energy only invests in technologies that have the potential to reduce global greenhouse gases by at least half a gigaton every year, representing about one percent of global emissions.

We need to start thinking in this order of magnitude if we want to get the job done. Only 2 % of all startups are founded in the cleantech sector each year and these will need to create and most importantly scale their solutions in the next decades.

And we still need entrepreneurs and innovators to create novel solutions. Because there are still industries which don’t have feasible solutions for their emission problems.

🤷 We do not have all the solutions needed

For more than 20 years, countries around the world have pushed forward on the development and deployment of renewable energies. This has dramatically reduced the cost of wind, solar, batteries, and many more, which are now the cheapest energy sources in most countries. The deployment of new renewable capacity is increasing every year and we are getting there slowly.

But renewable electricity generation is not everything. The power sector is responsible for only 29 % of global emissions according to Our World in Data and the International Energy Agency. And even when including the electrification of passenger cars and heating, there remain large parts of our economy which produce greenhouse gases without needing electricity.

The graphic below shows how emissions are split by sector and let me just pick some which are particularly difficult to decarbonise ranked by their share of total emissions:

These sectors already account for 20 % of global emissions and there are either no technical or no commercially viable solutions for these sectors, yet. There is just no way for us to get to net zero emissions without developing innovative solutions which are better in every way.

👎 Many existing solutions are not good enough yet

Many people believe that since wind & solar, electric vehicles, and heat pumps exist, we already have all the technologies we need. That we just need to deploy the existing solutions. And they are right, in some ways. For most parts of our emissions, we already have solutions or alternatives which could replace existing processes. However, there is one major drawback. While they are better in terms of global warming impact, many alternatives haven’t reached the level of commercialisation yet. They are not better than the solutions they want to replace regarding added value, cost, and scalability. But they need to become better in every way if we want to overcome the need for public subsidies which create and shatter sustainable industries with every change of government.

The difference in cost between conventional solutions and their green alternatives is called green premium. For example, there are several options for sustainable aviation fuels. Some are biofuels made from waste, others are e-fuels produced with renewable electricity and CO2 from the atmosphere. What they all have in common that they still cost approximately three times as much as fossil aviation fuels cost now.

Bringing down these green premia from several hundred percent to zero or even below is crucial to speed up adoption. Only with lower prices and same or higher value will the wider society adopt green alternatives, including those who just cannot afford greener alternatives today.

According to the IEA, 50% of the decarbonisation to get to net zero will come from technologies that have not reached commercialization yet. The founders of Northvolt understood this when they decided to found their company in Sweden, to mass produce cheaper and greener batteries for all applications – from electric vehicles (EVs) to household batteries. Driving down the cost of batteries through innovation in manufacturing and business integration has been the most important driver of EV adoption worldwide in the past ten years. And it won’t be long until nobody will want to buy an internal combustion engine car anymore. It just won’t be worth it anymore. Within five years, they started building battery factories with a production capacity of 170 GWh per year – that’s enough for 1.7 million EVs per year. Just check out their launch video from 2017 (do you also get goose bumps?):

💡 Innovation as part of climate action 🌍

For me, there is no “either or” when it comes to climate action on the policy side of things and innovation. Climate activists who demand policy changes instead of believing the fairy tale of ever progressing technology are right. Innovation and technological progress neither happen automatically nor by themselves. Only by fostering an innovation ecosystem and supporting innovators directly can technology thrive.

It is only when people like you and me decide to solve a problem and advance technology in some field that innovation occurs. For me this means that more people must become aware of the impact they can have with their job and with their investments. Choosing the right place to work or the right startup team to invest in has a higher impact than buying ocean plastic backpacks.

We need more people who put their energy into solving climate change problem by problem instead of inventing the next app selling advertisements. And for this we need to create problem awareness. Climate change isn’t solved. EVs are not everywhere yet. Building up, operating, and maintaining renewable power grids still has many problems that need solutions. Baseload is still difficult to cover with renewables as storages remain expensive. Maybe ultra-deep geothermal will solve that problem, maybe not. Cement and beton are still the best option for many buildings, because they enable cheap and fast construction – and they don’t have a solution for their climate impact yet!

While the big picture can be overwhelming sometimes, it also prohibits us from seeing the day-to-day problems that are decarbonisation roadblocks today. Most new business are created around single problems of a specific customer niche today. At the Climate Innovator, we dive into a specific niche every week, identifying problems and roadblocks in the sector and introducing innovators and entrepreneurs who are already trying to solve them.