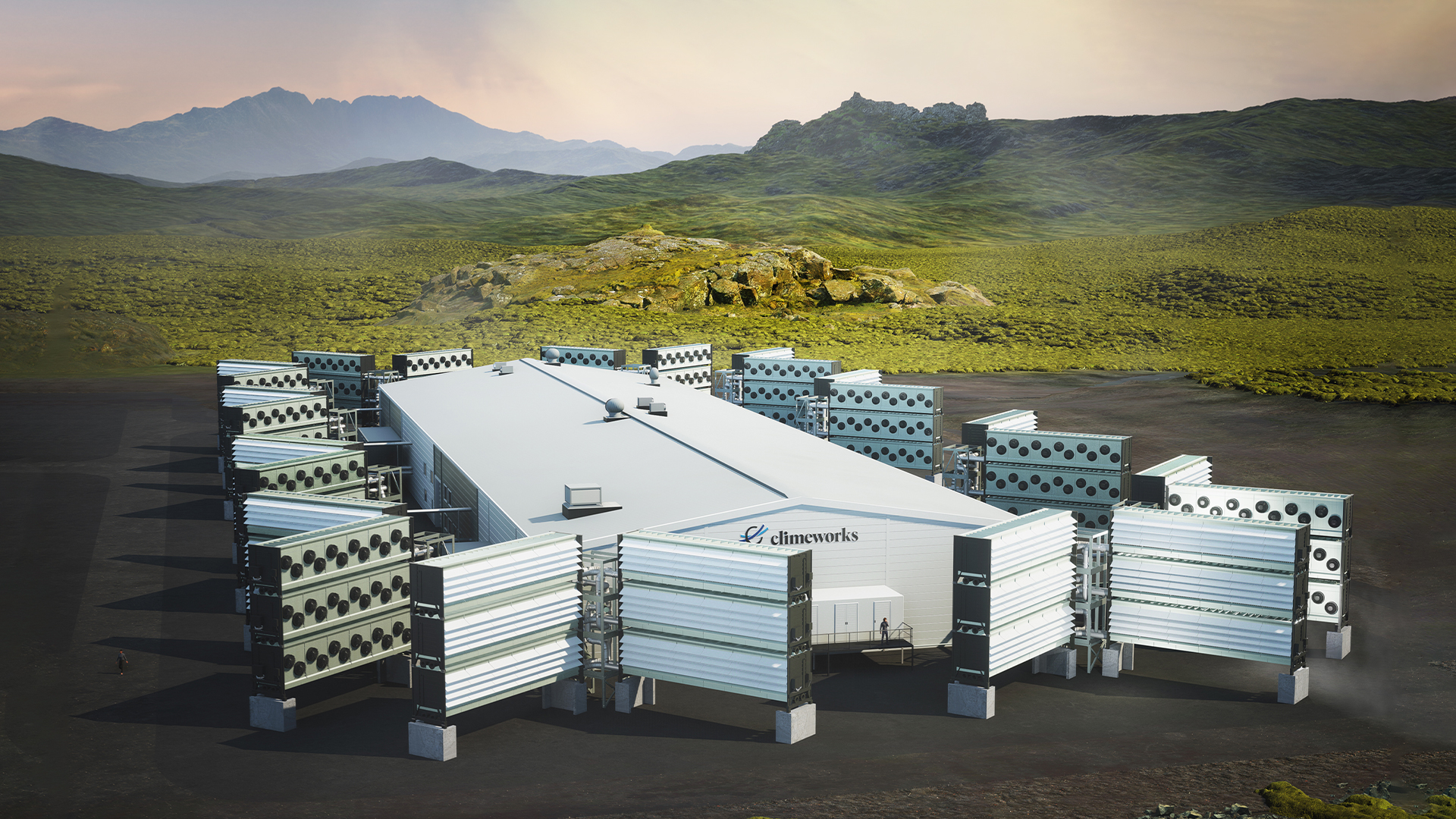 The Swiss startup Climeworks just started the construction of the world’s largest direct air capture (DAC) plant. Their goal is to remove carbon dioxide from the atmosphere directly.

It’s located in Iceland and uses their clean and abundant geothermal energy to remove carbon dioxide directly from the air. It is then mixed with water and pumped down into special stone formations. There, a chemical reaction turns the carbon dioxide into stone.

The plant will remove 36.000 tons of carbon dioxide from the atmosphere every year. Nice, right? This sounds big and is by far the biggest of the (only 19!) existing DAC plants we have worldwide.

However, this only resembles 0.00007 % of our global emissions of 52 Gigatons (billion tons) of carbon dioxide. So, it does not solve our climate problem really.

It’s even worse. Removing a single ton of carbon dioxide from the atmosphere currently costs from USD 600 to USD 1000. But emission allowances for large emitters or carbon taxes cost up to around EUR 100. Therefore, most companies won’t bother to reduce their emissions through Direct Air Capture and Storage. It’s just not worth it financially.

However, some big companies are in fact investing their money in buying carbon offsets from the growing DAC industry to support their growth, innovation, and operational scale-up. These companies include Microsoft, Stripe, Shopify, Swiss Re, and even United Airlines.

Even if it is hard to imagine at such prohibitive costs, direct air carbon capture and storage will play a significant role in fighting climate change. And today you will discover the answers to these questions:

🏭 Why do we need carbon capture and storage technologies in the first place?

And the only options we currently have at scale are afforestation and BECCS (Bioenergy with Carbon Capture and Storage). But their potential is limited as there are many trade-offs to consider in land-use as well as allocation of biomass.

Direct Air Capture and other alternatives like land restoration, soil carbon sequestration, enhanced weathering and ocean alkalinisation could provide more than enough carbon dioxide removal potential to get us on a safe path.

According to the International Energy Agency’s Net Zero Scenario, we will grow our Direct Air Capture capacities from currently appx. 0.040 Mt to 86.5 Mt until 2030. To achieve this enormous 2000x growth over the next eight years, we will need strongly cost reducing innovations, and companies & individuals who are willing to pay the Green Premium on these solutions to support their development. If you are one of these people, text me on LinkedIn or Twitter, and I will help you to find the best way of supporting these innovators.

Carbon removal, sequestration and storage is not a life extension for the fossil industry. It’s too expensive for that. But it is a lifeline for our global climate. That’s why we should make sure that we have the technology readily available when we need it. For that, we need to bring down its Green Premium.

🌫️ What is Direct Air Carbon Capture and Storage (DACCS)?

Direct Air Capture (DAC) or Direct Air Carbon Capture and Storage (DACCS) is a process where carbon dioxide is filtered out of the air, as you know by now. This sequestered carbon dioxide can then be stored in carbon storages, i.e., old gas fields or basalt formations. Imagine a giant vacuum cleaner (or hoover if you are from the UK) sucking all the carbon dioxide from the atmosphere. Just like the great movie Spaceballs (1987), where a giant vacuum cleaner was used to steal a planet’s atmosphere. Okay, maybe not “just like”.

The captured carbon dioxide can also be used as feedstock in industrial processes, e.g., to produce synthetic e-fuels, sustainable plastics, and many more. Eventually, we must not use fossil sources as carbon feedstock anymore, since burning the created products at the end of their lifetime would release fossil carbon again. Therefore, all products that require carbon (including your favourite fizzy drink) will get it either from biomass or from carbon capture technologies.

Of course, there are several technologies involved in each step of the process and for the purpose of this article, we will focus on Direct Air Capture and leave the storage aspect for another time. But going away from the picture of the giant vacuum cleaner, let’s find out how these things work.

To filter carbon dioxide out of thin air you need to have a filter in the first place. Today, there are two main technologies which are used for doing that: Liquid and solid DAC.

The cleaned air is released to the atmosphere again and the liquid absorber is processed further. Since the liquid can only absorb a limited amount of carbon dioxide (like when the sodastream start farting), it must be regenerated for repeated usage. Therefore, the absorber is heated up to hot temperatures where it releases the carbon dioxide which can then be collected and stored somewhere.

An alternative to liquid absorbers are solid adsorbers. While absorption is the process of gases being solved in the whole volume of a liquid, adsorption is the process of a gas being solved on the surface of a solid material. For example, these small silica gel globules which you can find in these small paper bags when you buy something new, they are adsorbers. When they come in contact with air, they draw the water out of it and store it on their surface, ensuring that, e.g., your new laptop, isn’t damaged by humidity while stored.

The same thing is possible with carbon dioxide. Solid filters can have a strong advantage over liquids: Their surface area is usually much higher! This is because these perfect little spheres aren’t spheres at all, but very porous structures, which have a lot of surface areas, as you can see in the image below.

Just like the liquid absorber, the solid filter also must be regenerated. For this, the filters are put into a vacuum and are heated. Then they release the carbon dioxide which can be captured for storage or use.

While the process of absorption or adsorption happens by itself without putting energy into it, there are two big parts in the full process that require a LOT of energy.

First, since carbon dioxide only makes up 424 ppm (parts per million) or 0.0424 % of the air, we must move many tons of air through our Direct Air Capture machine to get a single kilogram of carbon dioxide out of the air. This is often done with a lot of vents, as you can see in the title picture of this article. The vents require electricity to run, but the most energy is required in form of heat during regenerating the solvents.

As you can see in the graph below, even the most energy efficient DAC technology, liquid DAC, and use of the carbon dioxide instead of storage, needs as much energy as a 3-person household consumes in about 5 months.

Therefore, making the entire process more energy efficient is one important part of making it cheaper, too.

🚀 This is just the beginning of Direct Air Capture

You might be asking: Where are the innovators? Where are the startups which are driving this forward? Why isn’t Lars telling me about the amazing people behind these things?

And you are right to be asking this! It just turned out that this whole topic has such an extensive need for innovation that drives down the costs, that I split it into a mini-series.

In the next article you will discover how we could improve the first step of DAC: Moving extremely high air volumes more efficiently into our capture machines, so we can grab all that carbon dioxide without using even more energy!

The total mini-series consists of:

Thank you for reading this issue of The Climate Innovator!

If you enjoyed today’s insights on climate innovation, please support me and The Climate Innovator, by sharing this article with two friends of yours now.

See you next week,